The Fear Challenge and the Case for Promoting Peace

January’s report from UN Secretary-General Antonio Guterres, Peacebuilding and Sustaining Peace, outlines different initiatives taken over the past two years in implementing sustainable peace resolutions, drawing on a variety of countries’ examples of joint analysis and planning, effective partnerships, and innovative approaches to financing. But although progress has been made, there are obstacles in the road ahead.

I am an outsider to the United Nations—an academic who leads a multidisciplinary research team at Columbia University studying and modeling the dynamics of sustainably peaceful societies. Our review of the UN approach to sustaining peace has identified a few major challenges to its success—a central one being what may be called the “fear challenge.” An appreciation of this challenge can strengthen the capacity of the United Nations to support member states in sustaining peace.

Research has long shown that humans have two fundamentally different ways of viewing the world: as a place with problems to be prevented and as a place with opportunities to be achieved. These two distinct lenses lead to profound differences in how we see, think, feel, act, and lead. Because problems are usually experienced as threats and instill fear, they have long been prioritized over opportunities in human decision making and institutions. This is evident in the dominant focus in medicine on preventing and treating illness and pathology rather than on promoting wellness and human thriving.

Similarly, much of our thinking on international relations has long been dominated by a prevention mind-set based on the Hobbesian, realist assumptions that humans and their groups are intrinsically selfish, competitive, territorial warmongers who simply need to be prevented from killing one another.1 This basic belief was salient at the birth of the United Nations, which was formed in the wake of the horrors of World War II, Nazi death camps, and the nuclear nightmares in Hiroshima and Nagasaki. So it is logical that the United Nations’ orientation to its world peace mandate has long been focused on addressing crises and preventing problems like war and genocide—the crises are often urgent, and the problems are many and too often intractable.

But there is a problem with focusing solely on preventing problems. Researchers in many areas—including medicine, psychology, education, and economics—have found that the treatment and prevention of problems like disease, ignorance, and poverty, albeit critical, are often insufficient to promoting positive states of well-being. Our group has also found this in our research on peacebuilding. In over 20 studies conducted in Israel-Palestine, we found that the motives that drive people to want to end the conflict are fundamentally distinct from those that drive people to want to work to promote peace.2 They are not opposites—they are qualitatively different causes.

This essentially means that those of us who have spent our careers trying to study and promote peace have been missing half the story. This is evidenced by the fact that the vast majority of published research on peace focuses on negative peace or the elimination of overt forms of violence. Yes, preventing crises and addressing the root causes of conflict can reduce distrust, enmity, hostility, and violence within and between communities. But alone it will not promote trust, cooperation, common bonds, harmony, and peace. So the United Nations’ proposed transition toward preventing rather than reacting to conflict alone—while an important step—is not enough to achieve the goal of sustaining peace.

What is also needed is the promotion, measurement, and tracking of those factors that foster peacefulness in societies—the positive elements. However, positive measures of intergroup trust, harmony, cooperation, and social integration are simply much less common, and it is harder to find existing state-level data. It is also true that states of positive peace are harder to measure than incidents of conflict, violence, and war, because they are more nuanced, multidimensional, and less salient, and therefore less observable at any point in time. In other words, it is easier to see acts of violence and war than states of positive peace.

Nevertheless, we do know what to measure. As our research has shown, the study of peaceful societies teaches us that a few basic factors are associated with sustaining peace, including an overarching identity that unites groups across their differences; interconnections among subgroups through trade, intermarriage, sports teams, or associations; cooperative forms of interdependence due to mutual ecological or economic dependencies or common security interests; socialization of nonwarring values and taboos against violence in homes, schools, and communities; symbolism and ceremonies that reinforce and celebrate peace; and the physical safety of women, which is a better predictor of state peacefulness than levels of democracy, wealth, or religious fundamentalism. At the international level, research suggests that the emergence of territorial norms against conquest and violent succession, and supporting peaceful decolonization, combined with an increase in the availability and use of conflict-management processes like mediation, are associated with the movement of many bilateral state relationships in the direction of positive peace. So the positive indicators are increasingly clear. 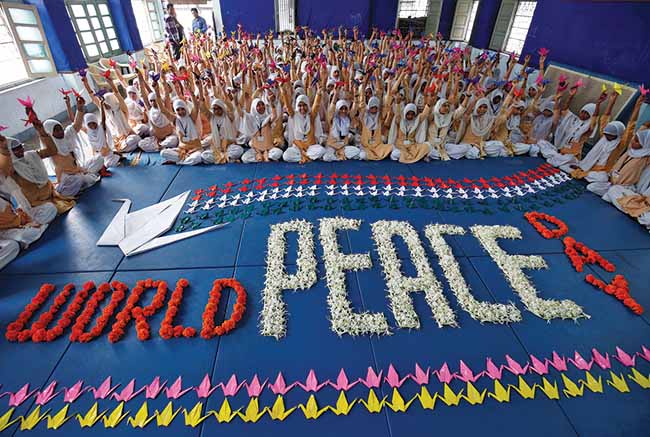 Nonetheless, our capacities to formulate policies that are conflict sensitive and peace promotive, to conduct conflict analyses and peace opportunity assessments on the ground, and to develop measures of and collect data on factors mitigating destructive conflict and promoting positive peace are sorely lacking. For example, the Global Peace Index (GPI), produced by the Institute for Economics and Peace, was launched in 2007 as an attempt to measure and rank the relative positions of member states’ levels of peacefulness. Once the developers of the scale realized it only measured negative peace, they launched a Positive Peace Index (PPI) to measure the factors that can improve a country’s positive peacefulness. However, even the PPI primarily measures the absence of problems. Our recent analysis of the 2017 PPI suggests that 57 percent of the current indices measure the presence or absence of problems such as discrimination, crime, intergroup disparities, civil disorder, and riots. This is also true for most indices used to measure UN Sustainable Development Goal 16 on promoting peace, justice, and strong institutions, which currently evidence a 3-to-1 ratio of problems to solutions.3

This suggests that even with a growing evidence base of the factors that promote positive peace, our narrow, negative view of what constitutes societal and international peace continues to constrain our capacity to build more-robust and therefore sustainable combinations of positive and negative peace. Accordingly, the systematic development and implementation of positive peace practices, goals, and indices should be a priority of the international community. Without them we will continue to focus on only “half the peace.”

What Does This Mean for the United Nations?

In light of this challenge, the United Nations should incentivize and support the systematic study of sustainably peaceful societies and international peace systems. Doing so would further develop the evidence base for promoting sustainable peace. Furthermore, it should take measures that will develop its capacities to formulate policies that are conflict sensitive and peace promotive, to conduct conflict analyses and peace opportunity assessments on the ground, and to develop measures of and collect data on factors mitigating destructive conflict and promoting positive peace.

A version of this article originally was published March 19, 2018, in the International Peace Institute’s Global Observatory.

Peter Coleman is a professor of psychology and education at Columbia University, where he is the codirector of the Advanced Consortium on Cooperation, Conflict, and Complexity (AC4).

1 This myth has been roundly refuted by archaeological evidence finding that war is a relatively new invention and humans lived in peace for millions of years prior to the onset of the scourge of war. Archaeologist Jonathan Haas sums up the situation: “There is negligible evidence for any kind of warfare anywhere in the world before about 10,000 years ago.” J. Haas, The Anthropology of War (New York: Cambridge University Press, 1990).

3 The recent development of indices such as the Gross National Happiness Index and the Harmony Index speak to the potential to better understand the conditions promoting positive relations.

Assessing Our Strategic Priorities for Mass Violence and Atrocity Prevention

Peace in Our Cities: Closing Summit for 17 Rooms