The Assault on Pelindaba

Shortly after midnight on a cold Thursday morning, four armed men sliced through the chain-link fence surrounding Pelindaba, a storage site for nuclear explosives on the banks of the Crocodile River, west of Pretoria, the administrative capital of South Africa. The raiders slipped under an array of high-voltage wires in the fence, then shut off the electricity and some alarms.

They stormed the emergency response center at the 118-acre complex, held a gun to the head of one of the employees there and shot another.

Around the same time, a second group of intruders breached another section of the fence. But both teams wound up fleeing after they unexpectedly stumbled on a firefighter at the emergency center who fought them while a substitute watch officer summoned help.

Whatever the raiders were after that night in November 2007, they didn’t get it. All they left with was one of their victim’s cell phones, which they quickly discarded. Ever since, the government of South Africa has dismissed the incident as a routine burglary by inept thieves who tried but failed to steal computers or civilian nuclear technology.

Many US officials in Washington had a different view—more closely matching the conclusions of an unpublicized, independent investigation ordered by the chief of the state corporation that manages Pelindaba. That probe produced an alarming report that has never been released—or even acknowledged—in South Africa, but was obtained by foreign intelligence agencies and described to the Center for Public Integrity by multiple people familiar with its contents.

The author, who formerly worked for Kroll Inc., an international investigations firm, concluded that the raid was a carefully planned operation, that it relied on inside help, that those involved had special training, and that it probably targeted the nuclear explosives. Its leads and recommendations were shared with South African officials.

More than seven years later, no one has been charged with a crime, and no suspects have been identified.

South African opposition parties have demanded a more concerted inquiry, but the ruling African National Congress has brushed the issue aside. Then-Defense Minister Mosiuoa Lekota told lawmakers in 2008 that the break-in was “a clear criminal act” and a matter for police to pursue.

William H. Tobey, the deputy administrator of the US National Nuclear Security Administration at the time of the break-in, is among many US experts disturbed by the episode. While he remains uncertain of the raiders’ objectives, he said he was convinced “there was insider participation.” Rather than face the implications of the assault, he said, South African officials are in denial about it.

The 2007 breach, one of three reported at Pelindaba since the end of apartheid 20 years ago, fueled US concerns that South Africa’s crime, corruption, and porous borders, all detailed in recent US counterterrorism reports, could make it a staging ground for an episode of nuclear terrorism.

Gary Samore, who was President Barack Obama’s principal adviser on nuclear terrorism until 2013, said government experts during his tenure regarded Pelindaba as one of the “most vulnerable” stockpiles of weapons-grade uranium in the world. The 2007 assault on Pelindaba, Samore said, “was certainly one of the main reasons South Africa would be on that list, because that really freaked people out.”

Pelindaba, a half-hour drive from Pretoria, stretches across a series of hilltops dotted with acacia trees and is circled by a 6.8-mile-long fence. In the basement of one building is a vault with more than six times the amount of explosive highly enriched uranium needed to create a blast larger than the US bomb that devastated Hiroshima.

But two experts familiar with the security arrangements say the building has no special guard force deployed full time at its perimeter, unlike similar repositories in the United States.

Waldo Stumpf, a senior official in South Africa’s nuclear programs under the apartheid and democratic governments until 2001, said that in his view “there’s no way” unauthorized parties can get into the vault.

But Roger Johnston, a physicist who from 1992 until early this year led a team of US Energy Department scientists that studied global nuclear security measures, said anyone who says a vault couldn’t be broken into “hasn’t really thought through the security issues—because, if they had, they would be sweating bullets.”

“It’s just not a business where you should ever be confident,” Johnston said.

The former Kroll investigator was hired by Rob Adam, then the chief executive at the Nuclear Energy Corporation of South Africa, which runs Pelindaba. He declined to share a copy of the resulting report, but the 98-page document, completed in March 2009, paints a darker picture of the episode than the government has, according to multiple people familiar with its contents. It describes how at every step the attackers displayed a detailed knowledge of Pelindaba’s security systems and the expertise needed to overcome them.

The first raider went straight to the electrical box, where he circumvented a magnetic antitampering mechanism, disabled the alarms, cut the communications cable, and shut down power to a portion of the fence and to alarms on a gate just 250 feet away, opening a path for a vehicle to exit.

This was not simply a matter of pulling a switch, a person familiar with the independent investigation said, but required electrical skills and knowledge of the security systems. Those who participated, the report said, had special training.

Once inside, the gang walked three-quarters of a mile uphill toward the fire station next to the emergency center. Working swiftly, the assailants broke in, found a hidden latch securing a fire truck ladder, and used the ladder to climb to the center’s second-floor landing. The raiders arrived on a night when they may have expected little resistance. The emergency center supervisor scheduled for duty that night used a wheelchair, but he had arranged for a colleague to take his place. She brought along her dog and her fiancé, Frans Antonie Gerber, an off-duty firefighter.

Security forces never confronted the raiders. But the dog’s barking, which led Gerber to see the intruders and his fiancé to call for help, thwarted the intrusion.

Three of the intruders attacked Gerber, and one shot him in the chest when he resisted. Apparently frightened off because of the phone call, the first team fled. The second did not go far before it, too, left, leading the investigator to speculate that its members had communicated with the first team. 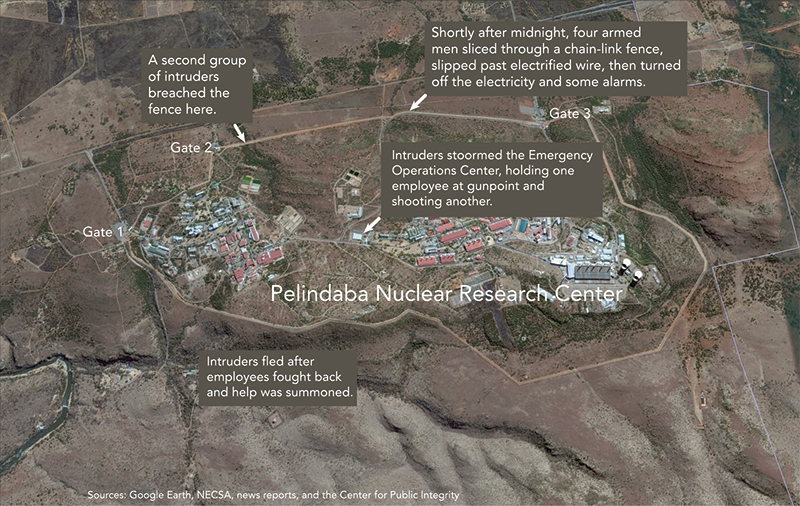 South African Police Service officials didn’t respond to requests for comment. Ronnie Kasrils, South Africa’s minister of intelligence services at the time of the raid, said in a brief e-mail that he had ordered a “thorough investigation” but that the results appeared to show it was a “routine burglary.” Siyabonga Cwele, his successor in 2009, declined to be interviewed.

The private investigator tracked down some of the cell-phone records of calls made in the Pelindaba area the night of the raid, which in combination with interviews and polygraph tests led him to two South Africans he ultimately suspected of having participated, as well as several others who may have been accomplices. But the suspects were never arrested or even questioned by police, according to two South Africans with knowledge of the case.

Whatever the raiders’ intent, a former US intelligence official said, they “had the run of the place. The more we learned, the more horrifying it was. . . . They could have gotten the stuff” if they had been more determined to do so.

Matthew Bunn, a Clinton White House nuclear security official who also advised the Bush administration on the issue, called the view that the raiders were common criminals “utterly nonsensical.”

“Nobody breaks through a 10,000-volt security fence to steal someone’s cell phone,” Bunn said. The assumption “to be disproved,” he added, was that they were after the weapons uranium.

Douglas Birch is a senior writer at the Center for Public Integrity. R. Jeffrey Smith is managing editor for national security at the center. This article originally appeared in The Washington Post on March 14, 2015. Read related stories.

The Outlook for Strengthening Nuclear Security
View All