Greater Than the Tread of Mighty Armies 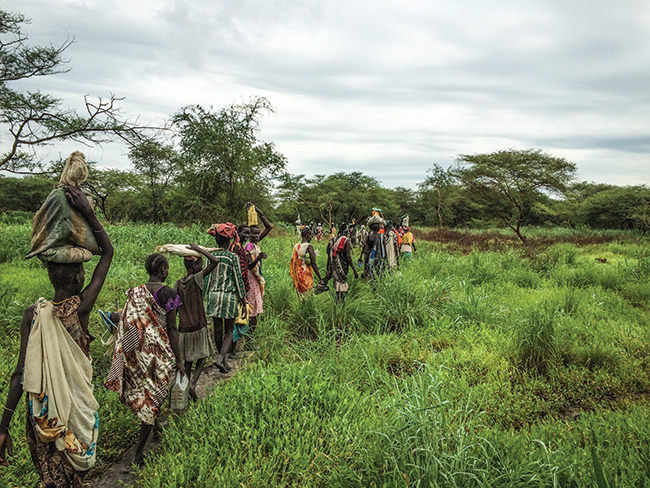 Displaced women faced enormous risks each time they left the Protection of Civilians site in Bentiu, South Sudan, in August 2015. In an attempt to address the growing number of reported rapes of firewood collectors, Nonviolent Peaceforce’s team in Bentiu began to accompany larger groups of women deep into the bush toward Borbor, approximately two hours northwest. Team Bentiu’s aim, along with providing direct protection, was to identify which routes women typically took when they venture outside the protection site. The team could then provide GPS coordinates to the United Nations Mission in South Sudan, with the aim of getting the mission to increase its presence on those routes.

Panic was nowhere to be found a few years ago, as a Philippine army patrol and a patrol of the Moro Islamic Liberation Front were converging on a village on the island of Mindanao. This was not the groups’ first incursion, and the people of the village had been trained in early warning/early response techniques.

As the patrols neared, the village implemented a protection strategy, which included calling on a group from my organization, Nonviolent Peaceforce, as well as the local civilian-protection team, Bantay Ceasefire, which was monitoring a nearby post.

En route to the village, the civilian-protection team called the local commanders of both armed groups. The team told the patrols they must have made a mistake getting so close to the village. The team also said it knew the armed groups didn’t want to scare civilians and, furthermore, that the commanders knew such action violated the ongoing ceasefire. To assure that things would go okay, the civilian protectors said they would stay in the village. By the time the protectors arrived, the patrols had backed off, and 600 people had stayed home instead of becoming internally displaced persons. 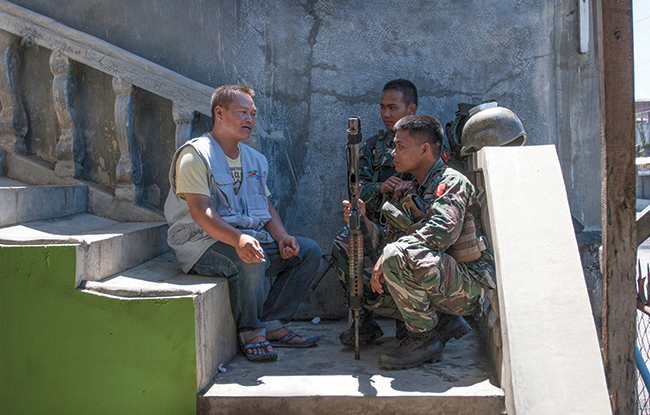 More and more of these stories are coming from areas of violent conflict throughout the world as unarmed civilian protection (UCP) emerges as an effective strategy to directly protect civilians. According to Selkirk College’s database on UCP, 39 nongovernmental organizations are nonviolently protecting civilians in 21 countries, including Myanmar, Iraq, South Sudan, and the United States.

UCP includes a series of methods for the direct protection of civilians, localized violence reduction, and support for local infrastructures for peace. While not appropriate in every situation, UCP can be employed in a number of places where armed peacekeepers cannot or will not go. For example, civilian protectors accompany women as they collect firewood in the bush of South Sudan so soldiers don’t rape them. UCP teams also provide a protective presence for the widows and orphans of ISIS fighters in northern Iraq, monitor the ceasefire in Mindanao, accompany Palestinians in need of hospitalization through Israeli checkpoints, protect communities of peace in Colombia, and interrupt gang violence in Chicago.

How Does UCP Work?

UCP is built on three pillars: nonviolence, nonpartisanship, and the primacy of local actors. By working nonviolently, civilian protectors do not bring more guns into environments already teeming with violence. By utilizing a variety of nonviolent interventions, they break cycles of retaliation. Modeling nonviolent behaviors stimulates nonviolent behavior in others. Practicing active nonviolence boosts the sustainability of peace operations and builds the foundation for a lasting peace. 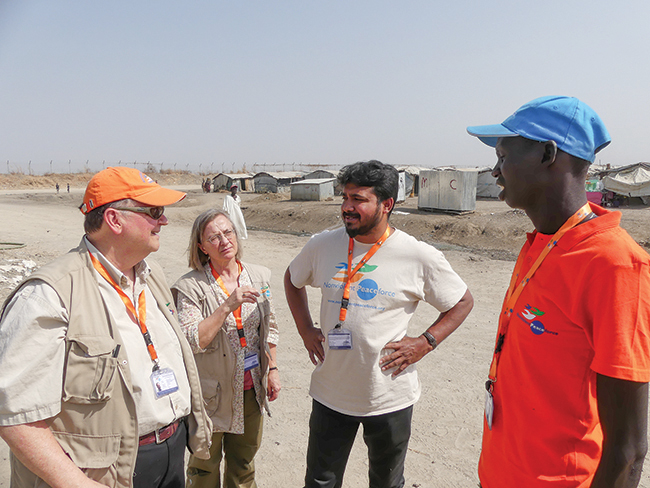 Almost all UCP groups work in a nonpartisan manner. This does not mean they are neutral on international humanitarian or human rights law, but it does mean they do not pick sides in a conflict. For example, this allowed Nonviolent Peaceforce to be invited by the government of the Philippines and the Moro Islamic Liberation Front to be part of the civilian-protection component of the 2009 ceasefire agreement in Mindanao.

UCP recognizes that peace cannot be sustained without local ownership. That starts with recognizing and affirming approaches for safety and protection that already exist within communities. When violence has overwhelmed local capacities, UCP prioritizes strengthening the abilities of local groups to manage and transform their own conflicts, which increases the sustainability of local peace initiatives. Furthermore, UCP recruits strategically toward these ends; typically, at least half of civilian protectors come from the host country, with women making up more than 40 percent of the ranks. UCP also focuses on building the capacity of local civilians. For example, Nonviolent Peaceforce has trained more than 1,000 women peacekeepers in South Sudan, who prevent children from being abducted by armed groups, intervene in local conflicts, and accompany women who have been raped to receive treatment and report the assaults. These peacekeepers and their valuable work remain in communities long after international missions leave.

How Effective Is UCP?

UCP’s ability to protect is based upon a mixture of encouragement and deterrence of combatant groups. Active nonviolence changes the equation with violent actors.

For example, when a militia attacked an area for internally displaced people in South Sudan, two civilian protectors, one from the United Kingdom and the other from Mexico, stood in the entrance of a hut protecting 14 women and children. On three occasions, the young militiamen pointed their AK-47s at the civilian protectors and profanely ordered them to leave. Each time the protectors calmly held up their Nonviolent Peaceforce identity badges and said they were unarmed, were there to protect civilians, and would not leave. After the third time, the militia left. The presence of UCP field workers can deter combatants who are susceptible to international pressures or worried about international tribunals somewhere down the line. Civilian protectors have been known to appeal to combatants’ religious values or even call in their family members. Often, combatants do not want to commit brutal acts in front of others. 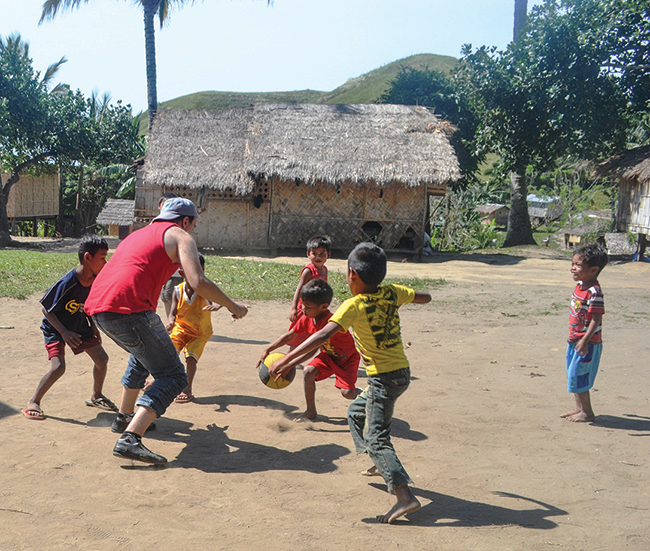 UCP is increasingly being evaluated. Dr. Rachel Julian of Leeds Beckett University in the United Kingdom has reviewed evaluations, case studies, reports, interviews, and observations of nine UCP organizations. Her review showed that under UCP: 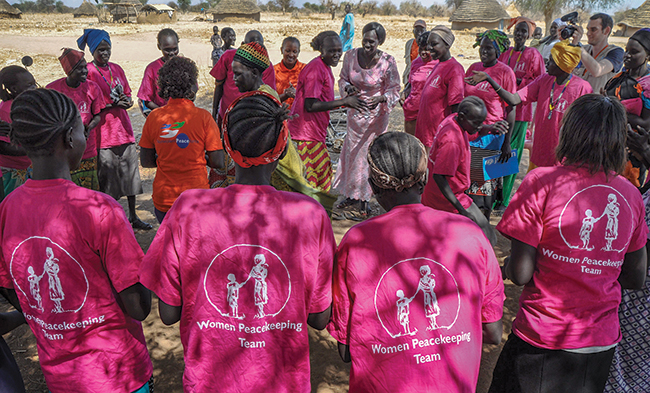 In his policy analysis of peaceful means in the third pillar of the Responsibility to Protect commissioned by the Stanley Center, Dr. Alex Bellamy of Australia’s Queensland University observed that UCP “functions by utilizing physical presence and moral pressure, peer pressure, and economic, political and legal leverage to influence would-be perpetrators of atrocity crimes.”

What Others Think of UCP

UCP is gaining momentum. The High-Level Independent Panel on UN Peace Operations (HIPPO) recommended that unarmed strategies be at the forefront of UN efforts to protect civilians. The Global Review of UN Security Council Resolution 1325 (on women, peace, and security) found: “Unarmed civilian protection (UCP) is a methodology for the direct protection of civilians and violence reduction that has grown in practice and recognition. In the last few years, it has especially proven its effectiveness to protect women and girls.” A synthesis report by the Norwegian Institute of International Affairs of HIPPO, the 1325 review, and the 2015 review of the UN Peacebuilding Architecture found that “all three reports offer a critique of the current privileging of huge, military-heavy peace operations” and that “privileging of militarized solutions by UN peacekeeping operations to violent conflict is counter-productive.” The report went on to note that “militarized solutions, and the resulting militarization of society, are detrimental to women’s security.”

UCP also is seeping into public policy. The UN Security Council recognized the practice in the mandate renewal for its Mission in South Sudan. In 2017, UCP was included in the UN Department of Peacekeeping Operations and the UN Department of Field Support’s policy guidelines for child protection and police. The German government supported UCP in its Guidelines for Crisis Prevention and Peacebuilding issued earlier this year. 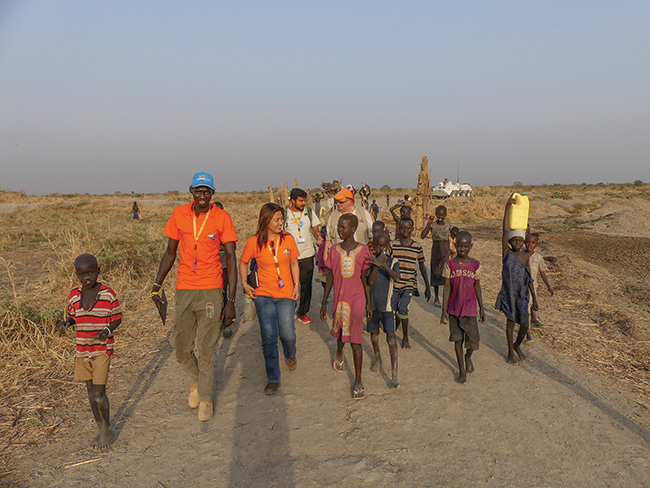 Such progress, however, is not enough. The UN High Commissioner for Refugees (UNHCR) reported in its 2016 Global Report that “war, violence and persecution have uprooted more men, women and children around the world than at any time in the seven-decade history of UNHCR.” Growing climate disruption is expected to escalate violent conflicts in the coming years, further exacerbating threats to human security. All current efforts to protect civilians, armed and unarmed, by multilateral organizations, governments, and civil society combined cannot keep pace with the growing need.

Nonviolent Peaceforce has initiated a four-stage, good-practice process to identify and validate practices that are especially effective in protecting civilians, under what conditions they work, and which practices can be replicated and scaled up. The good practices will not only improve fieldwork of UCP groups but will also be made widely available. At the end of the day, this work is not about Nonviolent Peaceforce or the other 38 organizations practicing UCP. It is about developing workable, cost-effective methods to protect civilians that can be scaled up and undertaken by multilateral, governmental, and civil society organizations. It is about learning to deal with violent conflict in ways that don’t escalate and promote more violence but rather sustain peace. As Dr. Martin Luther King Jr. proclaimed in his “Beyond Vietnam” speech 50 years ago, “We still have a choice today: Nonviolent coexistence or violent co-annihilation.” Let us embrace those methods and approaches that promote nonviolent coexistence.

Mel Duncan is co-founder, director of advocacy and outreach, and past executive director of Nonviolent Peaceforce. He also founded and directed Minnesota Jobs With Peace, Advocating Change Together (a self-advocacy organization of people with developmental disabilities), and the Minnesota Alliance for Progressive Action.