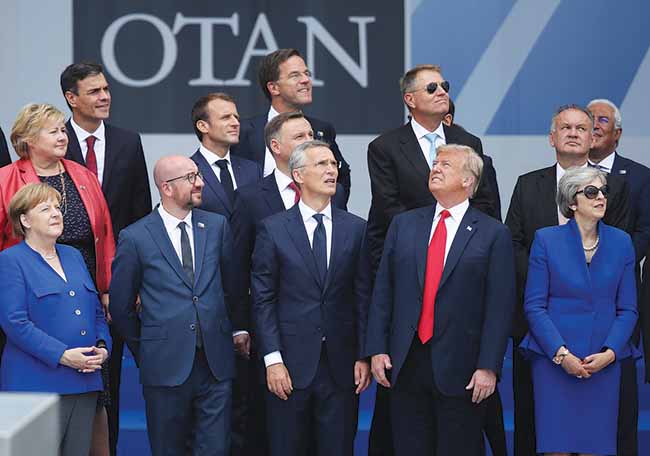 Is the US withdrawal from the Iran nuclear deal or Paris climate pact really big news? After all, the United States has a long history of failing to ratify treaties. But the full picture is more complex and the current climate more serious. The United States often tacitly supports agreements it hasn’t ratified. But now it has not only pulled out of several accords, it is threatening to undermine the purpose of those agreements and the spirit of multilateral cooperation that underlies them.

Even worse, President Donald Trump seems intent on destroying relations with key allies that form the fabric of cooperation.

Many countries, including allies, have long resented the contradictory role the United States plays in multilateral efforts. Nearly 100 years ago, President Woodrow Wilson drove the creation of the League of Nations. And yet he could not persuade the Senate to ratify the Treaty of Versailles, fatally wounding the league. This was later compounded by tariff wars that worsened the Great Depression and fueled the nationalism that launched World War II. The catastrophic horrors of the war convinced US leaders that strong multilateral institutions—economic and political—would be good for global peace, security, and prosperity, and for the United States.

That view held for decades, under Democratic and Republican presidents and Senate majorities, as the United States drove the negotiation and implementation of accords creating the United Nations, world trade and finance arrangements, the Universal Declaration of Human Rights, regional defense treaties like the North Atlantic Treaty Organization (NATO), and arms control agreements like the Non-Proliferation Treaty. These actions were spurred by the belief that multilateral cooperation could promote security and prosperity, lessons derived from the failure of the League of Nations and the ruin caused by destructive trade wars, and by a desire to show US moral leadership. That approach continued after the Cold War’s end, as the United States led the creation of the World Trade Organization, numerous trade accords, and the expansion of NATO as a security guarantor for Europe. The United States also supported and often ran (or tried to run) treaty implementation organizations and became—and remains—the leading funder of the entire UN system.

Many ask whether our current situation is worse than in the early years of the administration of George W. Bush, who formally “unsigned” the Kyoto Protocol on climate change and the Rome Treaty creating the International Criminal Court (ICC) and then threatened friendly nations with assistance cuts if they stayed in the court. (In both cases, the Clinton administration had negotiated hard for changes that would meet US demands before ultimately signing the treaties.) The invasion of Iraq without UN approval and open disdain for the UN role in sanctioning the use of military force further hurt US multilateral leadership.

But while the early Bush policies of attacking and sidelining multilateral institutions did serious damage to America’s global leadership, the United States never completely abandoned its important role in or support for a wide array of multilateral instruments, treaty bodies, and organizations—including some to which the United States never belonged. The United States remained an active, if sometimes difficult, member of the United Nations and most of its subsidiary organs, continued to be the leading financial supporter of UN agencies across the board, remained in almost every treaty it signed, adhered in practice to many treaties it never ratified, and, significantly, participated in and financially supported treaty bodies and treaty conferences—even for some treaties it had not ratified or had even left. This complex and nuanced (and sometimes frustrating) role has been criticized as “stealth multilateralism,” but many allies accepted its contradictions as better than nothing and as an often workable patch to the US approach. Importantly, the Bush administration also worked quickly to at least try to repair some of the key frayed relationships. 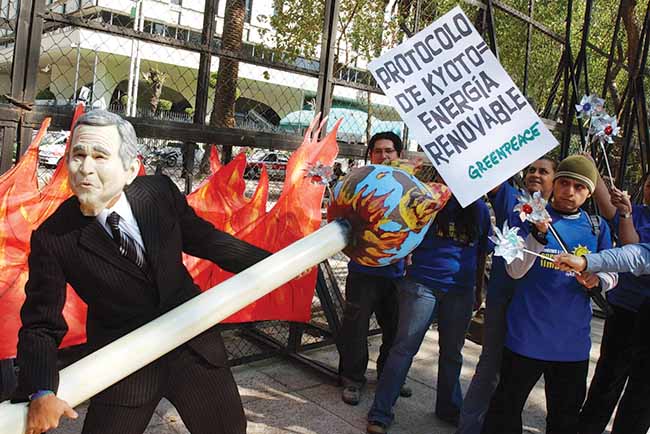 Across many administrations, the United States has adhered to and often set the standards for compliance with many conventions. Even though the Senate voted in 2012 against ratification of the Convention on the Rights of Persons with Disabilities, the United States leads the world in law and practice in disability rights. In 1992, years before the Comprehensive Test Ban Treaty (CTBT) went into force, President George H.W. Bush made it US policy not to test nuclear weapons, and that policy remains in place. The United States stopped using landmines—except in Korea—despite never signing the 1999 Ottawa landmine treaty.

Just as importantly, the United States has often gone beyond this de facto adherence to actively support implementation of treaties to which it is not formally a party. The United States participates in and funds nearly a quarter of the operating costs of the CTBT’s nuclear test monitoring system, which detected North Korea’s tests last year. Even the George W. Bush administration eventually agreed to calls for an ICC investigation of Sudan’s president over gross human rights violations in Darfur in 2005, a practice that expanded in the Obama administration, which provided more-robust assistance to the court.

And despite criticism of the 15-nation UN Security Council from all sides, the United States has successfully led that body to adopt numerous binding resolutions that require all UN members to do things like take action to stop terrorist financing, control weapons of mass destruction, and implement sanctions on states like Iran and North Korea. The United States funds and staffs the implementing committees and looks to these multilateral efforts to advance key goals. Most observers agree that it was coordinated sanctions on Iran that led it to the negotiating table in the first place, and getting those sanctions adopted required agreement from key countries around the globe.

Throughout the years there has been a lot of valid criticism of the United States for playing by its own rules on multilateral treaties, an approach that undermined the affected instruments and the US position as a multilateral leader, and a reality that gets us back to the question of whether Trump’s actions really represent anything new.

While Trump isn’t the first president to pull the United States out of existing agreements, he has hammered against the very notion of multilateral action in a way that goes beyond Bush-era rhetoric to something more like that of opponents of the very idea of the United Nations or that of supporters of the destructive tariffs of the 1930s. Furthermore, Trump threatens sanctions not just on Iran but also on those countries with whom we worked most closely to negotiate the Iran nuclear deal. He has used national security arguments to slap high tariffs on friends, left Pacific allies to negotiate a new trade agreement that ignores US interests, and created friction with allies that weakens the fabric of good relations essential to multilateral efforts and to US interests in general. And he has begun to cut US contributions to UN agencies and threatens to do more. 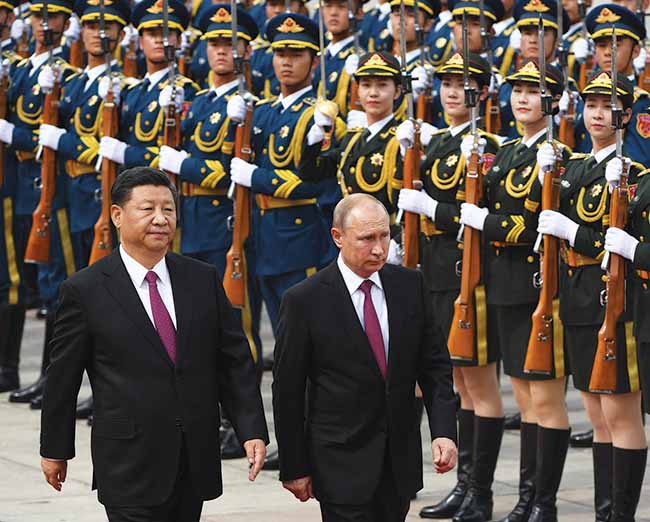 We are already in dangerous territory, and those of us who believe that multilateral action is critical to peace and security should be alert to signs of further erosion of the US commitment. Significant damage has already been done by our withdrawal from key agreements, but even more by the deliberate fraying of relations with partners like Canada and Germany, and by weakening our own institutions and undermining our values. Other danger signs to watch for would be continued fraying of relationships and of institutions like NATO and the North American Free Trade Agreement, any change in policy on issues like nuclear weapons testing or landmines, or dramatic slashing of budgets for the United Nations or treaty organizations or for the State Department (which has so far been threatened but not carried out).

The danger for the United States and for the cause of peace and security through multilateral action is real. The administration’s supporters argue that the United States needs to act in its own interest and make decisions that are good for the United States. But the lessons of the past tell us that unilateral actions aren’t in our own interest. The worst-case scenario is that US undermining of multilateral institutions starts a spiraling out of control that leads to war or conflagration, or just a meaner and less secure world. But it is also possible that others in the world will simply move on without us, and other countries—like China—will step up to take leadership of the political, economic, and security structures that set the rules for how countries operate in the world, imposing their norms and advancing their interests. Until now, the United States has held that leadership, and absent US engagement, rules will continue to be made that will impact us but that we will not help shape. Many Americans have stepped up to say they want to remain engaged, through local climate initiatives and action on nuclear disarmament, refugees, and trade, giving hope that the United States won’t leave leadership of the world scene to others. But building a new leadership will take effort and energy from us all.

Mary Curtin, a Minnesota native, joined the Humphrey School of Public Affairs at the University of Minnesota as diplomat in residence in 2013 after a 25-year career as a US Foreign Service officer. She has a Ph.D. in history from Columbia University and a B.A. from the University of Notre Dame.